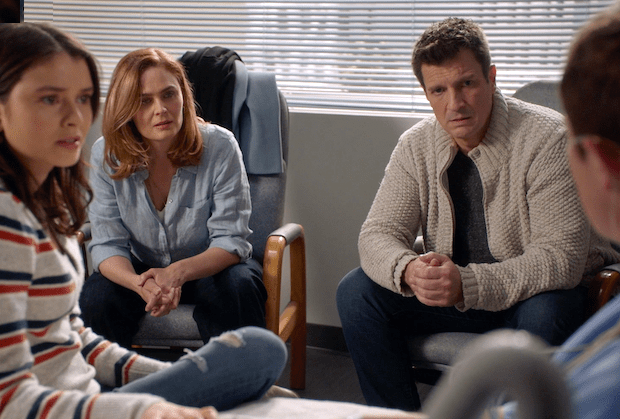 This week on ABC’s The Rookie, a family crisis sets the stage for the introduction of Officer John Nolan’s previously-unseen ex-wife, played by Bones alum Emily Deschanel – and TVLine has an exclusive first look.

The reason for Sarah’s arrival? At the end of the April 18 episode of the Light Trial, her and John’s adult son Henry (played by Zayne Emory) mysteriously and terrifyingly collapsed while visiting LA with her fiancé Abigail (Madeleine Coghlan).

On this Sunday’s episode, titled Brave Heart, which airs at 10 / 9c, Nolan (Nathan Fillion) is reunited with his ex after they took Henry to the hospital and they need to get together to help their son . Press “Play” at the top to see the regrouping of the broken family. But is Henry just out of the woods?

What do we know about Sarah so far? The October 2018 pilot episode of The Rookie discovered that she became pregnant with Henry while she and John were still in college. John immediately dropped out of college and started a construction business. Many years later, their marriage became strained and they agreed to an amicable divorce as soon as Henry left college.

Deschanel and Fillion, who both come from the long-standing TV show “Will They / Won’t They” (Bones and Castle), last shared the TV screen as presenters at the 2010 Emmy Awards.

Elsewhere in the episode this Sunday, Detective Lopez (Alyssa Diaz) discovers that the enigmatic and dangerous La Fiera aka Sandra De la Cruz (Camille Gauty) is in the same hospital as Henry and tries to figure out why.

Do you want to be on The Rookie or some other show? Email InsideLine@tvline.com and your question can be answered through Matt’s Inside Line.